Metafrax will double the capacities of melamine production 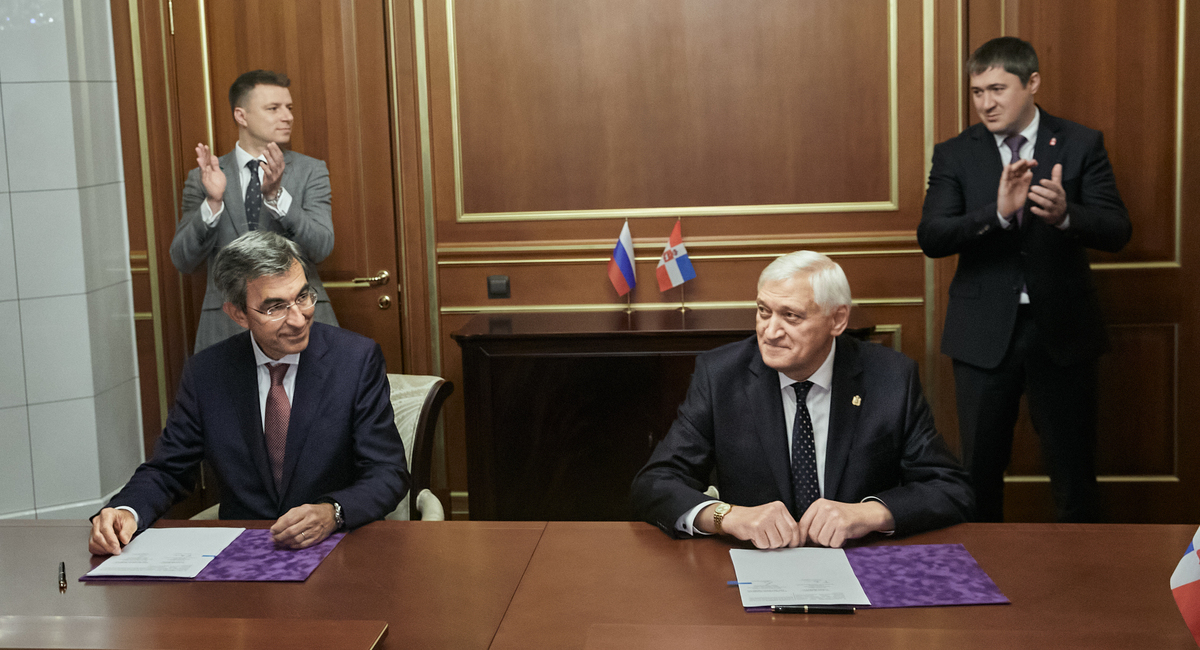 On 10th November PJSC Metafrax Chemicals and Casale signed the contract for implementation of a construction project for the second melamine plant at the company’s production facility in Gubakha, Perm region. With its start-up, Metafrax will be one of the biggest producers of this product in Europe.

New melamine production will be fully integrated with the units of Ammonia-Urea-Melamine complex, the biggest investment project of Metafrax Group with total price of tentatively 1 billion Euro. As of today the complex readiness is around 92 %.

“Construction of Melamine-2 plant is a continuation of Ammonia-Urea-Melamine complex history, construction of which we’re finishing this year, and it will be fully put in operation upon completion of commissioning works next year. Melamine consumption by our company till the year end will reach 48 thousand tons, and it will increase further. That is why the issue of the second melamine plant construction became urgent”, comments PJSC Metafrax Chemicals Board of Directors chairman Armen Garslyan. “It’s a challenging and expensive project, but it’s our strategical decision. We want to sell melamine to the market as well because all the consumers are the companies, with which we one way or another work both at our Austrian facility and in Russia”.

The project licensor is the Swiss company Casale SA. The equipment will be delivered by the biggest global vendors. Casale SA and Casale Project A.S. are experienced in construction of the facilities for chemical and petrochemical productions around the world.

“I can confirm that the technology, which will be used for this plant, is an advanced technology for melamine production in the world. This approach matches with our policy. All revampings, which we've been doing for many years at Metafrax, were aimed to reach for the company the highest in the world level of technological capabilities”, noted Casale SA general director Federico Zardi.

The capacity of the plant will be 40 000 tons per year. Putting the unit in operation is scheduled to the second half of 2025. With the start-up of the second melamine plant Metafrax will double the production capacities, and it will become one of the biggest producer of this product in Europe, which will allow the company to fully provide the internal consumers, decrease dependency on import and ensure partial supply of the product to export.

The scope of capital investment in the project is estimated as 27,4 billion Rubles. For implementation the company plans to engage both its own and loaned funds. Based on estimations of the company specialists pay-back period will be around 12 years.

“It is important that Metafrax development strategy is aimed to deep processing of raw hydrocarbons, which is the driver for development of both board production and several other productions in the country”, said Perm region head Dmitry Makhonin. “From region point of view development of Gubakha is important, which we promote jointly with Metafrax. As a result the town is transforming. For the territory of Kizel coal basin the company became the point of attraction, which allows us in cooperation successfully solve both the issues of these territories development and social issues, which are important for residents”.

Casale is a private Swiss company, which is fully owned by Casale Holding, with the headquarter in Lugano (Switzerland). The world-wide leader in development and licensing of proprietary technologies in the process of ammonia, methanol, urea and melamine production.

Melamine (1, 3, 5-triazine-2, 4, 6-triamine) — colorless crystals, slightly-soluble in water. Melamine is widely applied in industrial organic synthesis, including ion exchange resin, tannin, hexachloromelamine, which is used in production of dyes and herbicides. It is used for production of melamine-formaldehyde resins, which are used as a part of polymer compounds (glue, polish), as a binding polymer for molding compounds with different fillers (cellulose, glass fiber, wood flour) and as a concrete plasticizer, and also as a structural material for production of the finished items and foam plastics (foamed melamine).

During the last couple of years melamine demand was increasing due to strong growth of consuming industries. It is expected that in the nearest years there will be moderate or limited growth of world melamine market, depending on different regions. According to estimation of experts, growth of melamine world consumption will be 3,4% per year in the period from 2021 to 2025. In the long run market development will be facilitated by start-up in 2021 of new capacities for melamine production in Russia and China.